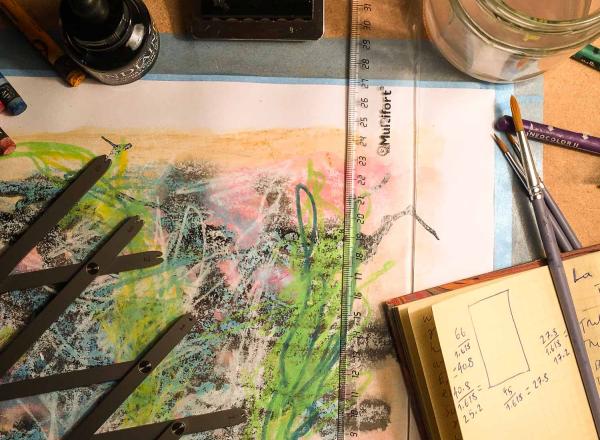 What is it that makes one painting “work” more than another? Classical painters would say it is due to complying to the of rules of composition, palette and pre-defined ratios. Others would say that it is the artists’ ability to touch the viewer, to move them emotionally. Others, something different still. Personal preference is what ultimately gives a work of art its value or not. Fulfilment of a personal objective is what will give the piece value in the eyes of the artist who made it – be that a figurative objective, one of coordinating calculated points or the ability to unleash personal expression without filters in a way that communicates to others.

For most artists there is a somewhat expulsing aspect to expressing oneself through ones’ work. However, without any other substance but personal musings to express, I find myself questioning the artistic versus therapeutic value of a work of art. No matter how powerful an artists’ message may be, without a minimum of technical skill, or some kind of formal structure, I find part of the intensity and value are diminished. For a while now in contemporary art, it seems that lack of technical knowhow and skill have been masked under layers of befuddling imagery. In my blog post last month, I write a whole article on this subject.

If we take abstract art, for example, works that have been made through applying traditional rules of composition will often stand out and simply seem to “work” more than the ones that were made through total uncalculated randomness. What makes a note sound right in a piece of music and a colour work with the rest of a canvas? It is often the fact that it was created through sticking to the rules that were discovered by previous great masters and that mimic features found in nature and to which we are naturally drawn. I find it fascinating that people can find themselves looking at something that may appear completely intangible and yet somehow understand and sometimes even like what they see. They will find themselves drawn to it without really understanding why – that is what equations such as that of the golden ratio set out to achieve: calculable beauty.

You will often hear people who have learnt how to play a musical instrument, or the basic rules of composition in visual art, saying that where and when they choose to make a mark or sound is based on making mathematical calculations. Many pieces of music, artworks and architectural structures have been created through respecting dimensions, tempos and proportions equated with the “golden number” Phi (φ) = 1.6180339… When basic rules of composition are respected, they create a solid foundation on which to then express freely and which our brains are able to recognise and process. Without those foundations, similarly to building a house, the results often lack the ability to stand up for themselves.

At which point, however, do the arts cease to be communicative if required to stay within rigid pre-defined structures that necessitate a somewhat elitist knowledge to be understood and appreciated? In my opinion the arts fail miserably if an A4 explanation is required for it to be intelligible to anyone other than the artist or those who have studied classical concepts of art. They become as unintelligible as some of the contemporary art of today in which there is often a total lack of any kind of comprehensible guideline and the viewer is commonly left grappling for understanding. I don’t think art necessarily needs to be “pretty” or “perfectly executed” according to previous styles or predefined “rules”. Its role is to communicate to others, to touch or to move in one way or another – to inspire.

As is true for most things we choose to specialise in, a good comprehension and practice of the basics is imperative to then move forward from. Having spent the last couple of years studying and applying classical rules in order to acquire that formal base, I today find myself wondering what meaning it has to continue to rigorously apply these “rules” in my work process. To produce work solely within a predefined structure that was invented decades ago, doesn’t exactly promote and develop individual creativity in the long-run! How does one know when it is time to move on though? When a goal that one sets out to achieve has been realized and one is ready for whatever is next? It is similar to when one works on a piece and knowing when the moment is to stop and accept that it is now complete – no matter how long or how quickly you one to that point. I believe that it is key to catch that moment when the challenge ceases to be creative and any pursuit in that same direction would simply be a repetition rather than a development of what one has already done.

August 15, 2016
This seems almost like you are bashing artists who like and prefer Abstract art. It actually inspired me to do an Impressionist style piece and made me realize that I was not being true to myself. I kept being told by clients and other artists that it was a beautiful work, but I did not feel it and the more I worked on it the more I disliked it and came to eventually hate it. It felt forced and I was not smiling as I painted. Usually when I paint, I smile, let my mind wonder and am happy; yet, in this experiment, I was unhappy and dreading working on it. Eventually I turned it into me- Abstract met Impressionism and I couldn't be more happy with my result. It even pushed me to write about my experience. I will post it to this group and I hope you read it and give me some feedback. I would love to hear what you and other artists think!

August 15, 2016
Thanks for taking the time to read through and leave a comment Kathleen. I'm not sure where you get the idea that I am "bashing" abstract art from however! I don't see where in anything that I have written it could be described that this is what I am doing (it certainly was not my intention) and If you take a look at my portfolio you will find the majority of what I do myself is abstract... I just looked you up online and discovered your work with interest. Lovely pieces and I think it comes through clear that what you paint makes you happy! I know the experience too and wish you all the best!