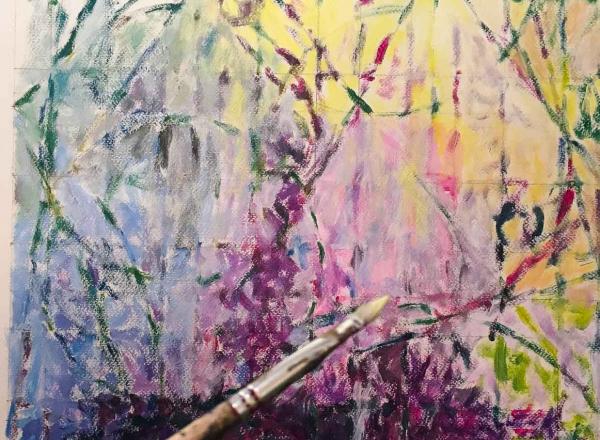 When I graduated from art college in the 90s, it was at a time when artistic expression, rather than form or technique, was all the rage. What you had to express, rather than how you did it, was what mattered. Artworks were valued on how original or, better still, provocative they were. The more whacky, far-fetched or raw the better. The practical part of my Fine Arts degree was focused on developing freedom of expression rather than acquiring technique or learning traditional skills. It was all about forging a style that stood out from your contemporaries and that you could verbally defend.

I wholeheartedly threw myself into being a contemporary sculptor and installation artist. Not only was it fun and exciting to be part of the contemporary movement at that time, it was also an important part of my creative development. It was what I now relate to as the “just do it” phase of my career. My brother and I still share a chuckle or two about the time he loyally came to one of my first exhibitions. He came to greet me across a dimly lit warehouse in London where a group of us final-year degree students were holding a one-night-art-happening. As he recognised me amongst the gathered people, he made a slightly relieved wave with his hand and then stepped right in the middle of my carefully poured milk-on-floor installation!

All artists go through different phases of creativity as they go through different phases of their life. My perspective is different from what it was twenty years ago. The shock and liberation value of seeing casts made in just about every kind of material possible, including human and animal excrement, of just about every human orifice possible has worn off for me. And yet I went to see a sculpture degree show last month and found myself having a quiet sigh when I saw that a group of students were still at it. Have we not ended up making endless versions of a once original idea? The “just do it” attitude, which I found so refreshing and cathartic at the time, today seems stale and to have become a bit of a bore. Practically every animal possible has been sawn in half, stuffed and then stuck to a wall or put in an observation tank in the name of art. I adored those artists that first did it for the impact it had on the art world at the time. So many fantastically “out there” pieces of work decanted out of that kind of “anything goes” movement; but today I am left feeling hollow and frustratingly uninspired by the “fast food” that it seems to have become.

When I picked up my career again as an artist, I decided to literally go back to the drawing board and learn traditional composition, form and technique. I wanted to learn how to draw and paint in a way that “worked” technically. I also wanted my creative practice to less be based on what is being expressed and more on how you apply yourself to produce a finished piece. I joined a weekly class taught by an artist who had rigorously studied the old masters’ works and their techniques. Mastering those skills is like learning a language: you need to practice a lot before it resembles anything like what you actually wanted to communicate. I have found it deeply grounding and surprisingly liberating to apply traditional rules of composition, form and structure to my work today. I get completely absorbed by the intricacies of how to prepare a palette and create a structure before starting a painting. I find “going by the rules” and “doing the maths” weirdly more cathartic for my creative process than going with the flow of what I feel or think on that particular day. Things you would never have heard me state a few years back!

We will always need to push against and break the rules put in place by previous generations to reinvent originality. But there is a reason that the techniques and rules put in place by great masters “work”: they are based on calculations that our brain understands and finds aesthetically pleasing. Without any kind of basis or structure, the language of art, just like any language, becomes nonsensical noise. Surely part of what makes visual art an “art” is its ability to communicate something without the need for verbal explanations. To present a personal perspective in a way that resonates understanding in others. In discussing with other artists, from varying fields and generations, I realise that a gathering number of us are all too keen to bring the practice of an art, with all that that stands for, back into our studios. Might a collective desire to bring back traditional technique become the backbone to the next generation of contemporary art…? Count me “in” if so.

July 7, 2016
Hello Victoria, I am an artist from Geelong Australia whose practice is based on dematerialised art forms such as dialogue, pedagogy, socially engaged art and participation. I found your article so interesting, because I sense a disillusionment with mainstream populist contemporary art and, if I have read you correctly, I too share this view. Interestingly thought my practice has gone the opposite way entirely and I am making art that is non-object-based and unsalable for the consumption of art in its traditional sense. I know many conceptual artists are too returning to representational and traditional techniques, however mine has been the opposite, where I feel there is an emerging place for drawing people together in social forms of art, which requires a huge shift in thinking about what materials artists are now using. Mine happens to be conversation. I teach university art students and I come across this very dilemma every day, so it has been informative to hear about the direction you have taken. I understand what it means to go against the grain of the powers of art that rule, and it is is brave gesture. Thank you for your article. Fiona

July 9, 2016
Hello Fiona, Thank you so much for leaving such a considered and interesting comment. I always find it fascinating to hear of other artists' creative processes and to share ideas, points of view and information. It is really encouraging to read your post and I would love to see what you do. I have tried looking you up on internet but, like me, you share your name with several others so I am not sure which one is you! I will keep searching but if you have a moment, please would you get back in touch and leave a web link or send me a message through the contact form so that we can keep in touch? Or if you are on LinkedIn, Facebook, Instagram etc, you can also connect with me via any of those. Thanks again and wishing you all the best in making art in your own way. Victoria

July 9, 2016
Hello again Victoria, yes it is difficult having a common name. I have attached my details and it would be lovely to keep in touch. We live in very interesting time for the arts and it's exciting, and scary, to be part of it. I have an Insragram account @therogueacademy1 and a Facebook page with the same account. All the very best and again thanks for an insight into your practice. Fiona

July 11, 2016
Thank you Fiona for giving me your contact details. I'm so pleased to have discovered you and your work! I am now following you on Instagram and Facebook... think I also found you on LinkedIn...? All the very best and we'll keep in touch

October 1, 2016
Hello Victoria, and Fiona also, I share your disillusionment for mainstream populist contemporary art. A lot of galeries seem to choose for 'easy money': 'visual pleasing artwork' ( what you see is what you get, you don't have to really connect with it or do any soulsearching, it's just a nice picture) or for hypes like using dead animals or variations (in use of materials) on 17th century artworks. Apparently that's what a lot of art buyers want and ofcourse galeries want to sell. After all galeries are stores too and have to earn a living. I do understand that but I also think it is sad that the art world is so much influenced by the opinion of the mainstream public. It's like fast food indeed. It's what we see in writing too: '50 shades of grey' is a bestseller and good literary writers have a hard time selling their books. The great painters in history were always ahead of their time, misunderstood in the time they lived. They became famous afterwards precisely because they were innovative. The mainstream public wasn't able to understand them at that time. That's exactly why the mainstream public can't have such an important say in which artwork is exhibited. I heard two art historian say (apart from eachother) that 80% of the art in galeries today won't exist anymore in about 100 years. But then again, galeries often have a hard time surviving. You could say it is up to the musea to take responsibility for showing the public innovative art but musea today are said to be mainly influenced by galeries.... What a dilemma! Maybe, Victoria, it is like you write in your latest blog, social media is the answer: maybe it is up to the artists themselves to show their artwork directly to the public. Or galeries have to take a brave role: show innovative art and educate the public... Honour to the galeries so brave to do so!

October 6, 2016
Hello Marieke, Great to read your input on the subject and thanks for your interest in following my blog posts as you do. Some interesting points, I like your literary comparison and fully agree! Let's see how things evolve with the world of exhibiting art in the years to come. All the best to you and your artistic practice.